AERIAL HOOP, also known as Lyra, is an exciting fun challenge to add to your workout routine. Lyra is a metal hoop suspended from the ceiling that is used to perform various acrobatic and circus-like tricks. We offer beginner and intermediate level classes that will help build strength and increase flexibility. This class is perfect cross training for pole or aerial silks students, but no experience is necessary to attend your first class. Each student progresses at a different level and classes are individually tailored to each student.

COME TRY YOUR FIRST CLASS FOR $10! 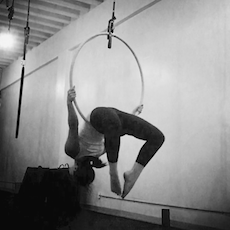 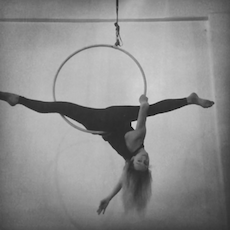 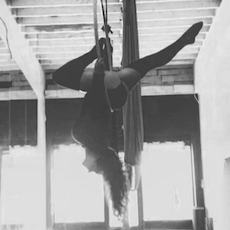 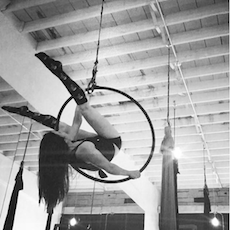 Lyra uses an aerial hoop suspended from the ceiling to do acrobatic tricks that strengthen and tone the body while creating better body awareness and control. This is a beginner level class focusing on moves on the bottom bar and spins. No prior pole or aerial experience needed.

Lyra uses an aerial hoop suspended from the ceiling to do acrobatic tricks that strengthen and tone the body while creating better body awareness and control. This is a beginner to beginner intermediate level class progressing more to top bar hands and beginner level drops. This class is suitable for clients who have taken a few lyra classes.

Lyra uses an aerial hoop suspended from the ceiling to do acrobatic tricks that strengthen and tone the body while creating better body awareness and control. This is an intermediate level class progressing into drops and more tricks on the top bar. Previous experience is recommended.

Lyra uses an aerial hoop suspended from the ceiling to do acrobatic tricks that strengthen and tone the body while creating better body awareness and control. This is a mixed level class that can range from beginner to intermediate. The instructor will modify to fit each students level and students will progress at their own pace.

Open studio time to come and work on your tricks on your own time. Someone will be around to monitor, but there will be no instruction at this time. This is a time to work on the moves you have already learned during class time. Must be a member of Be Fitness for open practice. If you are not a member or are from out of town, please call us for approval to attend open practice. Open practice rate is free for members and $10 per hour for non-members once approved.

Monthly memberships are great for students who want to work on their practice on a regular basis. Memberships are valid for all class types, so be sure to mix and match! Choose the best option that fits with your schedule and how often you wish to practice.

Your membership contract automatically charges to your MindBody account on a monthly basis. You can cancel your contract at any time, however, we require a 7 days notice prior to cancellation. To set up a membership contract, please call the studio or visit our MindBody website and select Contracts under the “Online Store”. This option is not available on the MindBody Connect mobile app at this time.

Students who choose to purchase their membership out of contract on a month-to-month basis will be charged a $3 processing fee each month.

Students receive up to 20% discount when purchasing 3, 6, or 12 months at a time! Ask for more details.

Class packages are great for students who do not want to commit to a monthly membership and want more flexibility with their schedule. Like memberships, class packages can be used for all of our class, so be sure to mix and match!

Throughout the year we offer various workshops dedicated to specific skills such as choreography, technique, free-style flow, and more. Students who participate in these workshops are able to perform in our upcoming showcases. Workshops range from 75 to 90 minute classes and can be done separately or in a series. Members receive discounts for all workshops (exceptions may be made for touring pole athletes).

Check out our schedule on MindBody under “Workshops” for the upcoming workshops.

Individual or small group training is for those who prefer personalized attention and a class that is designed to cater to your specific needs. This option gives you the extra focus on your personal intentions and goals. Private lessons can significantly increase skill and confidence of the individual. You may prefer private lessons for personal growth, goals for competition, a performance, or for preference of anonymity or privacy.

Options for instruction include:

The studio has space to hold multiple individual training sessions simultaneously. There is a privacy fee if you would like to have the space available for only you and your friends.

To schedule your private or small group lesson, please contact us or request an appointment on our MindBody site under the “Private Lessons” tab. If requesting an appointment online, please note that we cannot guarantee a time or instructor. We will give you a call shortly after placing your request to confirm your lesson time.

Be Fitness has a strict late cancellation policy. A $25 fee will automatically be charged for any cancellations that occur less than 24 hours prior to schedule private instruction. No shows will be charged the full class rate. Students are required to have a credit card on file in case of a late cancellation or no show. 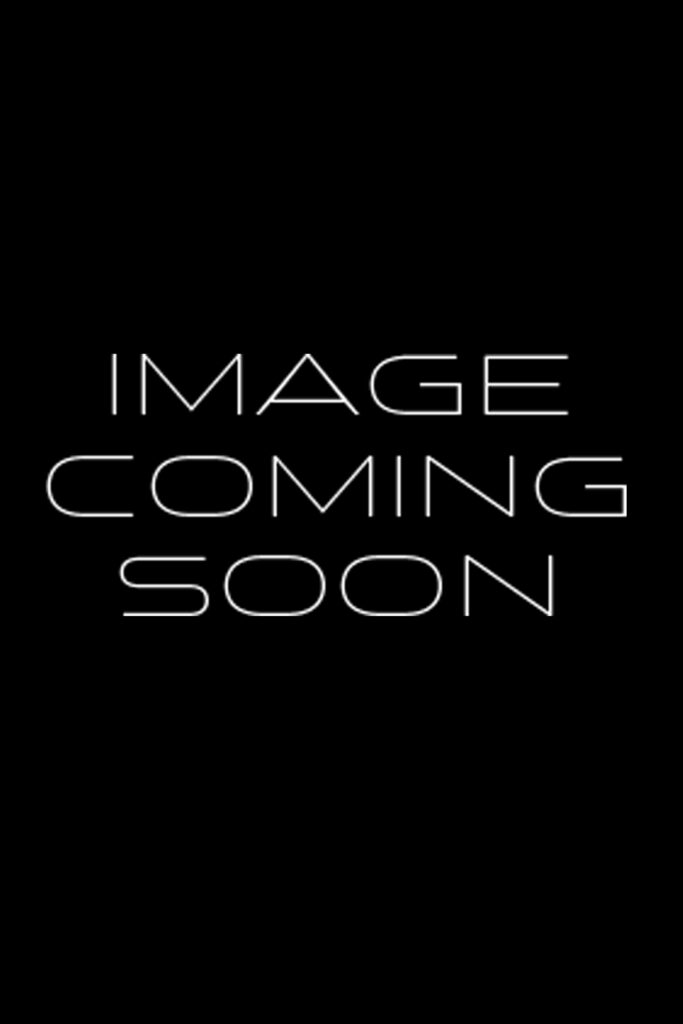 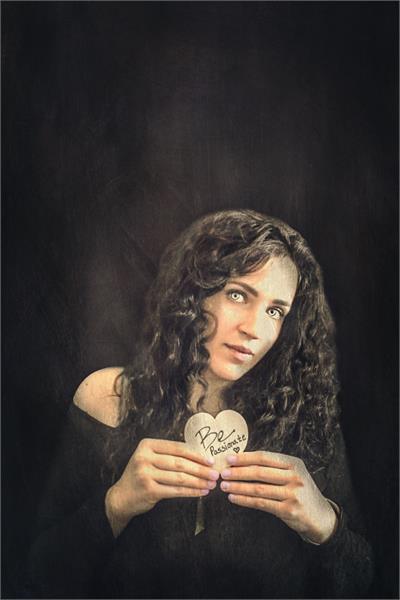 Maribel has been doing aerial and pole since September 2018. She got into aerials for fitness, because she hates the gym. She started with a Groupon to take a lyra class at Be Fitness and became hooked!
Her favorite part about aerials and pole has been discovering how strong and disciplined she is. She has never been able to do a pull up in her life and now can lift her body up and down all over the place. She put so much effort in learning and improving at the apparatuses, which reminds her of how much she can accomplish when motivated enough. She saw progress right away and that kept me coming back.
She teaches her classes in the way that she trains herself. Classes include lots of conditioning and repetition, to achieve that desired move or routine. Maribel’s favorite aerial moves are dynamics all the way, baby! She loves moves like Rolls, drops, and transitions.
Outside of aerials, Maribel is a plant and cat mother. Seems like a juxtaposition, but they’re learning to get along. Her 70+ plants, Lyra, Bellatrix, and herself are doing great!

I started taking Lyra classes in January of 2018. After I took that first class I signed up for the studio’s first aerial workshop. It was A LOT harder than the class I had taken and I started to get frustrated that I just wasn’t going to get it. I stuck through it when another student said to me  “it’s just the moves that are getting harder” and it gave me a perspective that really got me through. The very first class I had taken at the studio was for aerial silks yoga and then a couple of beginner pole classes. When I was leaving one evening, I saw a lyra hoop setup and it just spoke to me, you know? The instructor had said this is the lyra and it hurts when you’re on it, but you should try it!  After that class I felt like I had finally found my apparatus! By the end of class we had a routine that we could record ourselves doing and I was just hooked after that.

I completed my Aerial Hoop Professional Teacher Training certification in August of 2019. I began teaching in January of 2020, almost exactly two years after I had taken my first Lyra class! I was stirred to start teaching after some positive feedback I had gotten after my showcase performance. “Teach me your ways”, is what a fellow performer had said to me after I performed to Queen’s “I Want To Break Free.” It was during a time of great transition, loss and growth that I decided to go for it! I started teaching to sitr others on to see what their bodies and minds can accomplish, even if just for an hour. I would like my students to feel strong, light and free. I guess I would say that my class is dance based.  I like to put moves together in a sequence. I think it helps to teach a couple of moves that flow into each other when you are learning. I feel it gives you a bigger picture of the whole craft.
Outside of class I am raising an eleven year old boy who teaches me a lot about myself, the world we live in and how to stay relevant haha! I am a cat mom to Cove Diddy Pumpkin. (that’s his full name) lol.
I am an Enrollment Specialist at Orchard Park Academy. I ride my bike and skateboard on occasion. I knit but have not yet graduated beyond making scarves. I am a Black Lives Matter ally. Born and raised in Cleveland. Lakewood High School Alumnae. Recovering perfectionist. 😉
I believe that everything is in the process of becoming (Rob Bell) and that above all the meaning of life is to live it as if it were a work of art. (Abraham Heschel)

Cristina Romanello reveals the inner mysteries of the commonplace, allowing her audience to ponder the beauty of the scenes we so often take for granted. Cristina succeeds in evoking our sense of wonder by unveiling the usual to reveal the exceptional.

Her passion demanded that she put the art before the course- she developed her style in her hometown, Cleveland, with only a disposable camera and the wet streets as her studio. After studying photography professionally, she found the last piece she needed to create a world of beauty we might never have glimpsed if we hadn’t looked twice.

“There is beauty all around us, and having an instrument to capture and document these moments is remarkable”